We’ve been hiding our bundles under a bushel! Find out more >>

Software customers - Download your software, get updates and serial numbers.

For sales or support: 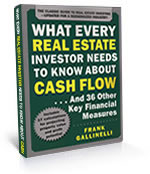 Frank Gallinelli’s popular book, “What Every Real Estate Investor Needs to Know about Cash Flow…” is now available in a new third edition. Frank has added detailed case studies while maintaining the essentials that have made his book a staple among investors. The new cases show how to evaluate an apartment building, a mixed-use, and a triple-net leased property — not just running the numbers, but also looking beyond the surface data to see how you might discern what’s really going on with a potential investment.

McGraw-Hill first published Frank’s book in 2003 and has since sold over 100,000 copies. For more than a decade it has been a top title in the real estate section at Amazon.

For those seeking reviews from readers, look to the 100+ reviews, which collectively rate the book at 4.7 out of 5 stars.

In recent posts I’ve been revisiting some key real estate investment metrics. Last time I discussed the finer points of Net Operating Income, and that topic should serve as an appropriate run-up to the subject of capitalization rates (aka cap rates). What are they and how do you use them?

Income capitalization is the technique typically used by commercial appraisers, and is a part of the decision-making process for most real estate investors as well. I invite you to jog over to an article I’ve written on the subject:

In addition, you can download Chapter 10 of my book, Mastering Real Estate Investment, which discusses cap rates and gives you several examples you can work through.

Your time and your investment capital are too valuable to risk on a do-it-yourself investment spreadsheet. For more than 30 years, RealData has provided the best and most reliable real estate investment software to help you make intelligent investment decisions and to create presentations you can confidently show to lenders, clients, and equity partners. Learn more at www.realdata.com.

The information presented in this article represents the opinions of the author and does not necessarily reflect the opinions of RealData® Inc. The material contained in articles that appear on realdata.com is not intended to provide legal, tax or other professional advice or to substitute for proper professional advice and/or due diligence. We urge you to consult an attorney, CPA or other appropriate professional before taking any action in regard to matters discussed in any article or posting. The posting of any article and of any link back to the author and/or the author’s company does not constitute an endorsement or recommendation of the author’s products or services.

I was pleased to see that Commercial Investment Real Estate, the magazine of the CCIM Institute, featured my latest book, Mastering Real Estate Investment in their May/June 2009 issue Buyers Guide (p. 45). The piece is entitled “Beyond the Basics,” and I think they were right on the money, so to speak, when they said that I was “Responding to a call from readers for less theory and more practice…” Thank you, CCIM.

A reader of one of my books wrote to me recently with a very worthwhile question.  When we build a pro-forma analysis of future cash flows from a real estate investment, why do we annualize those cash flows instead dealing with them on a monthly basis?  After all, rent is typically collected and bills paid monthly.

The quick and facile answer, of course, is because we’ve always done it that way. Back in the day, we didn’t have powerful personal computers and sophisticated real estate software, so one might argue that this annual approach is just a holdover from a golden age that has passed us by.

Then again, there may be some wisdom inherent in this approach. To make monthly estimates of future cash flows requires monthly, rather than annual, estimates of income, expenses and debt service. The task is not impossible, but collecting, organizing, and deploying this amount of data will surely take much greater time and effort, presumably up to twelve times as much. And we all know that time is money.

Is it practical to do this, and if so, is it worth the effort?  It’s important to keep in mind that you’re not performing an accounting function but rather making projections about what’s going to happen in the future. It’s often difficult enough to estimate your annual cost for heating fuel or electricity five years hence. Trying to estimate such costs by the month can be even more problematic and time-consuming.

Assuming that someone else hasn’t already closed on this property while you were playing Hamlet, did you in fact gain any additional insight or advantage as a reward for your extra effort?

A monthly projection of future cash flows substantially increases your “degrees of freedom” in making estimates, so the monthly estimates are not only more difficult to make, but they also provide you with many more opportunities to be wrong. To put it another way, you are just as likely to introduce errors in timing as you are to add precision, thus offsetting at least some if not all of the benefit of your considerable extra effort.

Having said all this, it is also true that a dramatic skewing of cash flow toward the beginning of a year could make a noticeable difference in a particular discounted cash flow calculation. One might feel that is justified to handle such an atypical income stream differently.

For what it’s worth, my opinion is that the conventional wisdom here actually makes sense. Forecasting the future is an imperfect art; in most situations, annualizing the net cash flow is a reasonable compromise with reality and a task of more manageable proportions.

I thought you might like an opportunity to see some sample chapters from my new book, so I’m making two downloads available.

The first section of the book is devoted to 37 key formulas that every real estate investor should understand and know how to use.  One of the most important of these is capitalization rate.
Chapter 10 discusses cap rate and gives you several examples that you can work through.

The second part of the book provides case studies where I take you step by step through different kinds of property investments.  In Chapter 38 I discuss using a single-family house as a rental property.  This download is a seven-page excerpt from the chapter, which continues with a thorough discussion of the single-family rental.

I hope you find these samples useful, and welcome your comments.

Save a Bundle of Money

Choose from one of our four software bundles and save as much as 36%!

Our newsletter about wise investing and software updates.

Check your email to confirm your subscription